RonDB is a distributed DBMS and thus need efficient communication to other nodes. Internally RonDB implements a functionally distributed thread architecture. This means that each individual request will be executed using multiple threads. Thus it is vital for RonDB performance that the communication between threads is also very efficient.

In the part on Research using RonDB we show that the thread pipeline model used in RonDB is very efficient compared to executing everything in one thread. The performance improvement can be as high as 30-40%.

In the figure below we show how communication between threads in RonDB is handled. 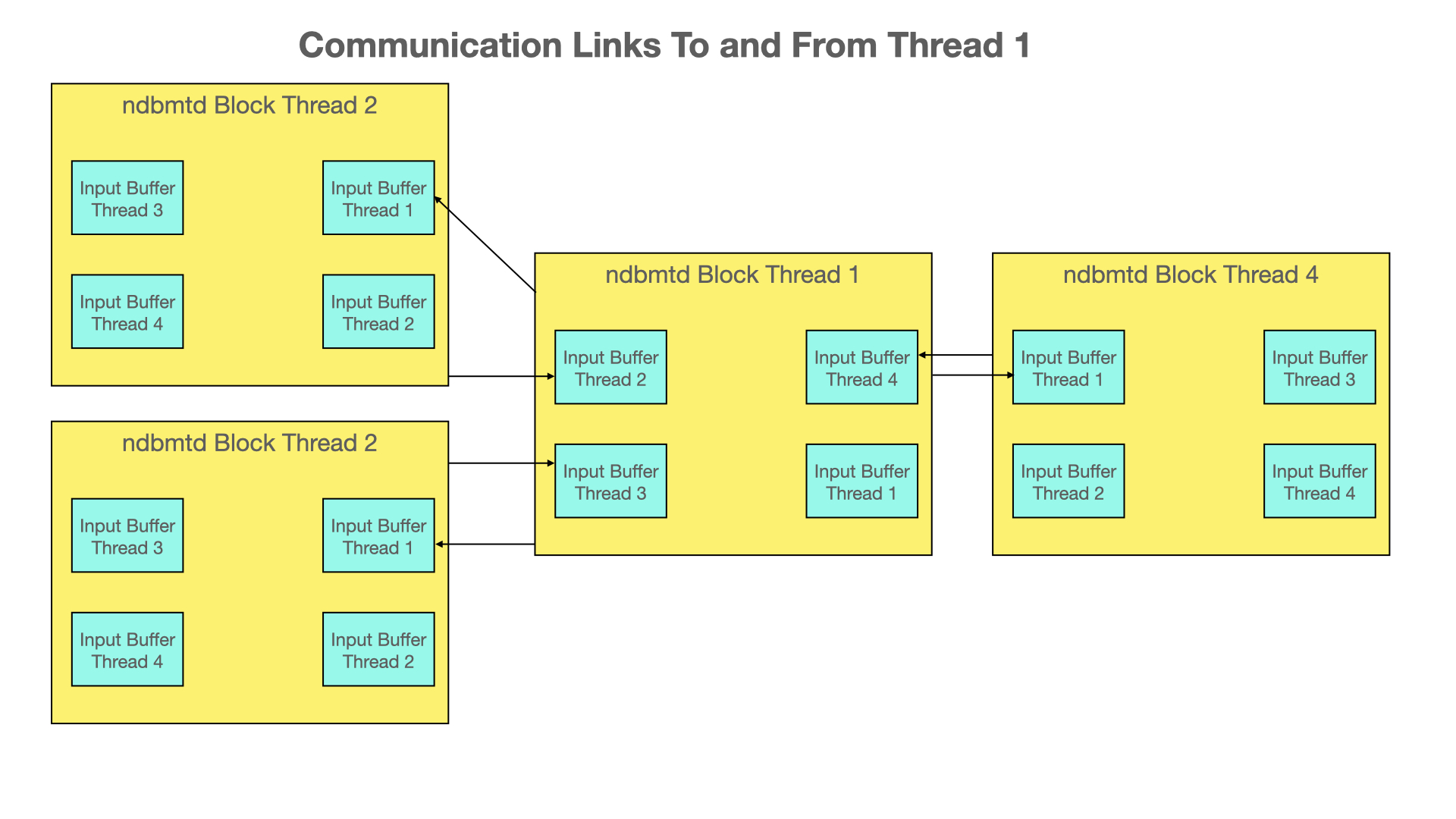 Each thread has its own input buffer to each other thread. This means that each input buffer has a single reader thread and a single writer. In this model there is no need to use mutexes to implement the communication mechanism.

It is however important to use memory barriers in the correct places. The reason for this is that one needs to communicate head and tail information separate from the actual data of the messages. This means that the writer must ensure that the reader sees all data in the message after he has seen an update of the head information.

This model works fine in a moderate amount of threads. The problem with this model in larger nodes is that the number of input buffers grows exponentially. In addition the reader must scan through more and more input buffers.

To avoid this exponential growth we use a limited amount of input buffers in larger nodes. This means that we have multiple writers and a single reader. This requires a mutex protecting the input buffer.

The extra overhead through use of mutexes is around 1.5%. Obviously in larger nodes this loss is regained by scanning less input buffers.

How many messages should be sent before we update the Head information. If this number is too low we will execute too many memory barriers, If it is too high the latency in sending messages to other threads will be too high.

In our case we set this constant to 2 for communication from all threads except from receive threads. Receive threads set the constant to 20 instead. Receive is mostly about communicating with other threads and not executing so much on their own, thus it is natural that they have a higher constant.

Another very important constant is the number of messages to execute from one input buffer before moving to the next input buffer. If this is too high the delay in handling messages from other threads can be blocked by some thread that sends a lot of messages. We set this constant to 75. It is very rare that the input buffer contains that many messages. Thus it is mainly used in extreme load situations.

The number 75 is based on that our design requirement is that one message should be executed in no more than 1-2 microseconds.

When we send a message to another thread we need to ensure that the thread is either awake already or that we send a wakeup signal to it. We use an implementation based on futexes on Linux (integrates assembler instructions in the wakeup handling) and mutexes with condition variables on all other platforms.

Here is another constant to consider, how many signals should we send to another thread before we check whether the receiving threads are awake or not. This constant is configurable and the lower it is set, the lower the efficiency, but with a better latency.

We have actually exactly the same wakeup problem when sending to another node that uses the shared memory transporter. In this case we use mutexes that are designed for interprocess communication.

Waking up a thread can be costly, it can take up to 25 microseconds and can cost a bit of CPU usage also on the thread performing the wakeup.

With this in mind we implemented the possibility to perform CPU spinning before we go to sleep. Previously this used a static CPU spinning where we spun independently of whether it was a good idea or not.

We can configure the adaptive CPU spinning on three levels. The lowest level is cost based spinning. In this we allow up to 70% of overhead for gaining latency. Thus in the case above with expected wakeup time of 20 microseconds will start spinning if the expected wait time is less than 34 microseconds.

The next level which is the latency optimised level allows for 1000% overhead to gain latency, this means in this case that we start spinning if the expected wait time to the next wakeup signal is below 220 microseconds.

The final level is the database machine level. In this case we allow for 10000% overhead. This means more or less that if there is any chance to gain latency we will spin. There is however a limit on the spinning time, we will never spin for more than 500 microseconds. 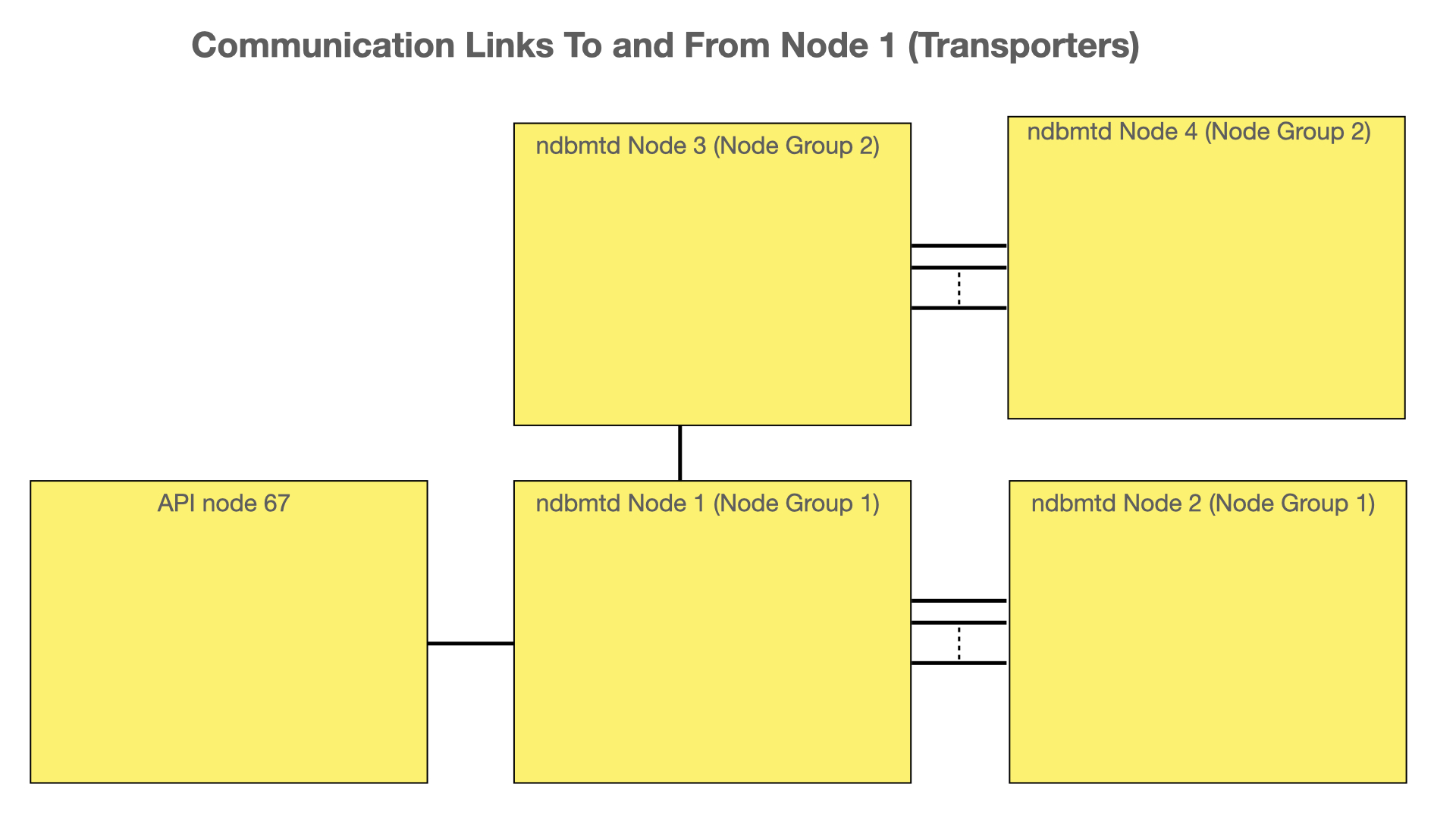 Historically there has been other transporters as well such as a Dolphin SCI transporter, an OSE/Delta transporter and an experimental RDMA transporter.

In this manner the load on receive threads is distributed in a fair manner.

Each message is sent to an address which is 32 bits similar to an IP address. The lowest 16 bits is the node id, next there are 6 bits indicating the block id and finally there are 10 bits used as thread id.

Most messages are using the address to a physical destination that maps exactly to a thread and a block in this thread.

However in RonDB we also support Query threads. These threads can execute signals on behalf of ldm threads. In RonDB 21.04 they can handle all Read Committed messages except those that involve disk columns. In RonDB 22.01 they can also be used for key read lookups that require locking with some limitations when used in the context of batching and disk columns.

When a message can be sent to a query thread the receiving block is the virtual block V_QUERY.

It is possible to define send threads in the configuration and it is done in the automatic thread configuration if the number of CPUs is sufficiently many. If no send threads are used the sending is handled by each thread on its own.

Each block thread will call a method called do_send every now and then. In this method a set of signals will be sent to other nodes if no send thread is in the configuration.

In the configuration a parameter called ThreadConfig can be used to specify quite a few details of how the threads should behave. One possibility here is to state that a specific thread is never going to assist send threads.

Send buffers is a global resource, they are allocated by the sending thread. The release of them however happens in the send thread or in a thread assisting the send thread.

In the figure below one can see that send buffers are allocated when the signal is sent in the block thread. A bit later we move the send buffers to the queue of send buffers for that node. This requires a mutex protecting this move. This move happens when the thread calls do_flush. Both do_flush and do_send calls are controlled by configuration parameters that can be affected by setting parameters in the ThreadConfig or by special management commands in the NDB management client. In our experiments we haven't seen very much impact on setting those parameters differently, but lower values obviously improves latency at the expense of throughput and vice versa if one increases the values. 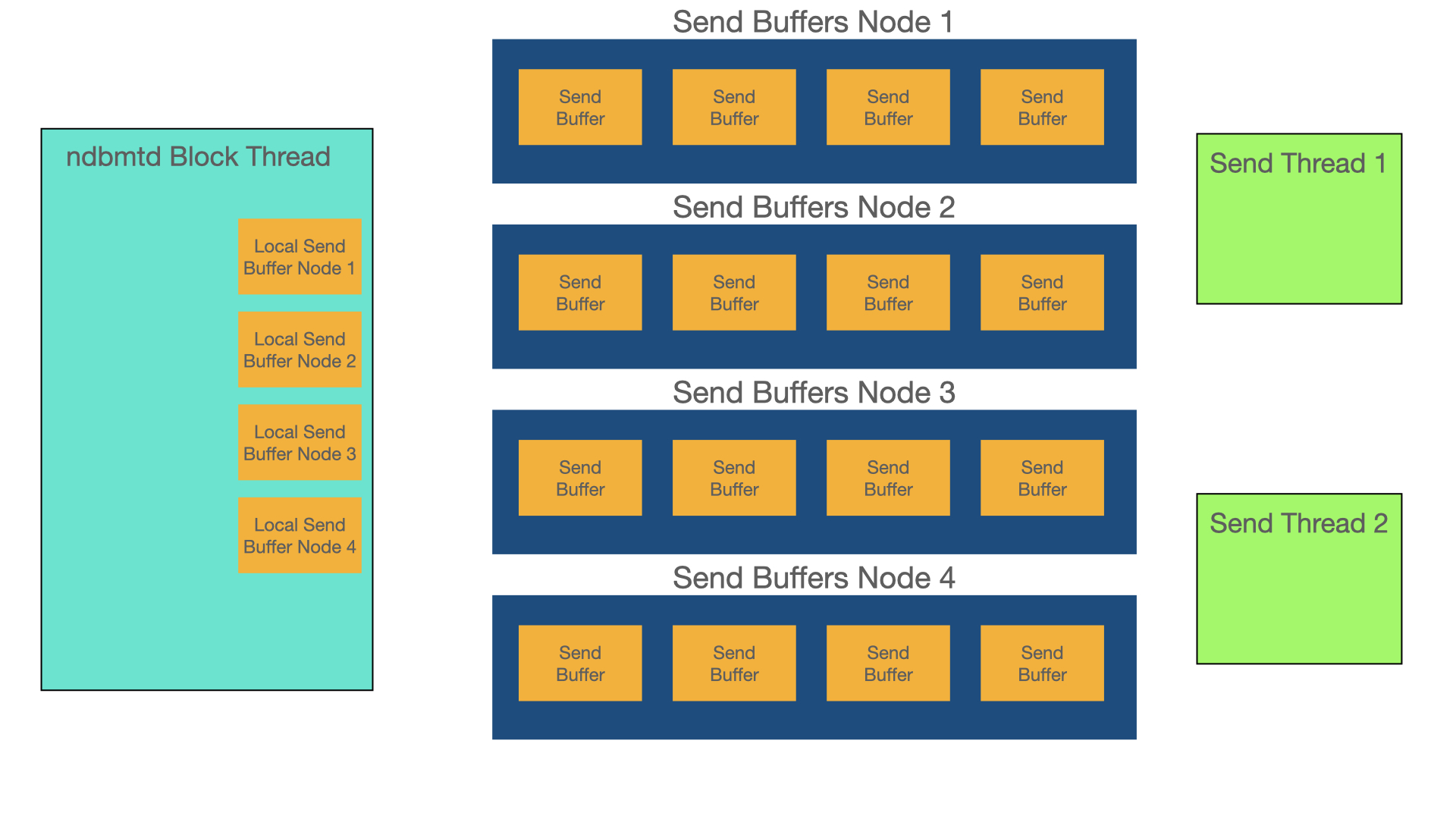 Finally the send buffers are used to send to the other node using a transporters send method by a send thread or a block thread assisting a send thread.

Send buffers are a set of 32 kByte pages. Sometimes we need to pack those send buffers when we have a lot of pages with only a small portion of the 32 kBytes used. There is a lot of checks in the code for places to pack the send buffers.

We have some controls in place to avoid that we send to another node too often. Sending too often leads to a higher load on the communication and can lead to cyclical increase and decrease of throughput. In an experiment with 32 nodes pushing many millions of operations per second we saw performance go up and down by a factor of 2. By ensuring that there was always at least around 100 microseconds between sends to the same node we removed this cyclical behaviour and performance was stable at 3 times the lower dips previously.

This behaviour is adaptively handled in the send threads.

Previously there was a global mutex protecting lists of nodes ready to be sent to. This list was handled by multiple threads and assisted by a lot of other threads.

This mechanism didn't scale as good as desired. In RonDB each send thread handles communication with a subset of the other nodes. Each such send thread maintains a list of ready nodes to send to. Block threads can only assist one of the send threads, thus the responsibility to assist send threads is distributed among the block threads.

In addition each transporter has a mutex on the send buffer that have been moved to it. It also has a mutex used when performing the send operations.