This chapter introduces how RonDB handles automatic thread configuration. This chapter is more technical and dives deeper under the surface of how RonDB operates. RonDB provides a configuration option, ThreadConfig, whereby the user can have full control over the assignment of threads to CPUs, how the CPU locking is to be performed and how the thread should be scheduled.

In addition RonDB makes use of adaptive CPU spinning in a way that limits the power usage, but still provides very low latency in all database operations. This improves latency by up to 50% and in most cases more than 10% improvement.

RonDB 21.04 uses automatic thread configuration by default. This means that as a user you don't have to care about the configuration of threads. What RonDB does is that it retrieves the number of CPUs available to the RonDB data node process. In the managed version of RonDB, this is the full VM or bare metal server available to the data node. In the open source version of RonDB one can also limit the amount of CPUs available to RonDB data nodes process by using taskset or numactl when starting the data node. RonDB retrieves information about CPU cores, CPU sockets and connections to the L3 caches of the CPUs. All of this information is used to set up the optimal thread configuration. 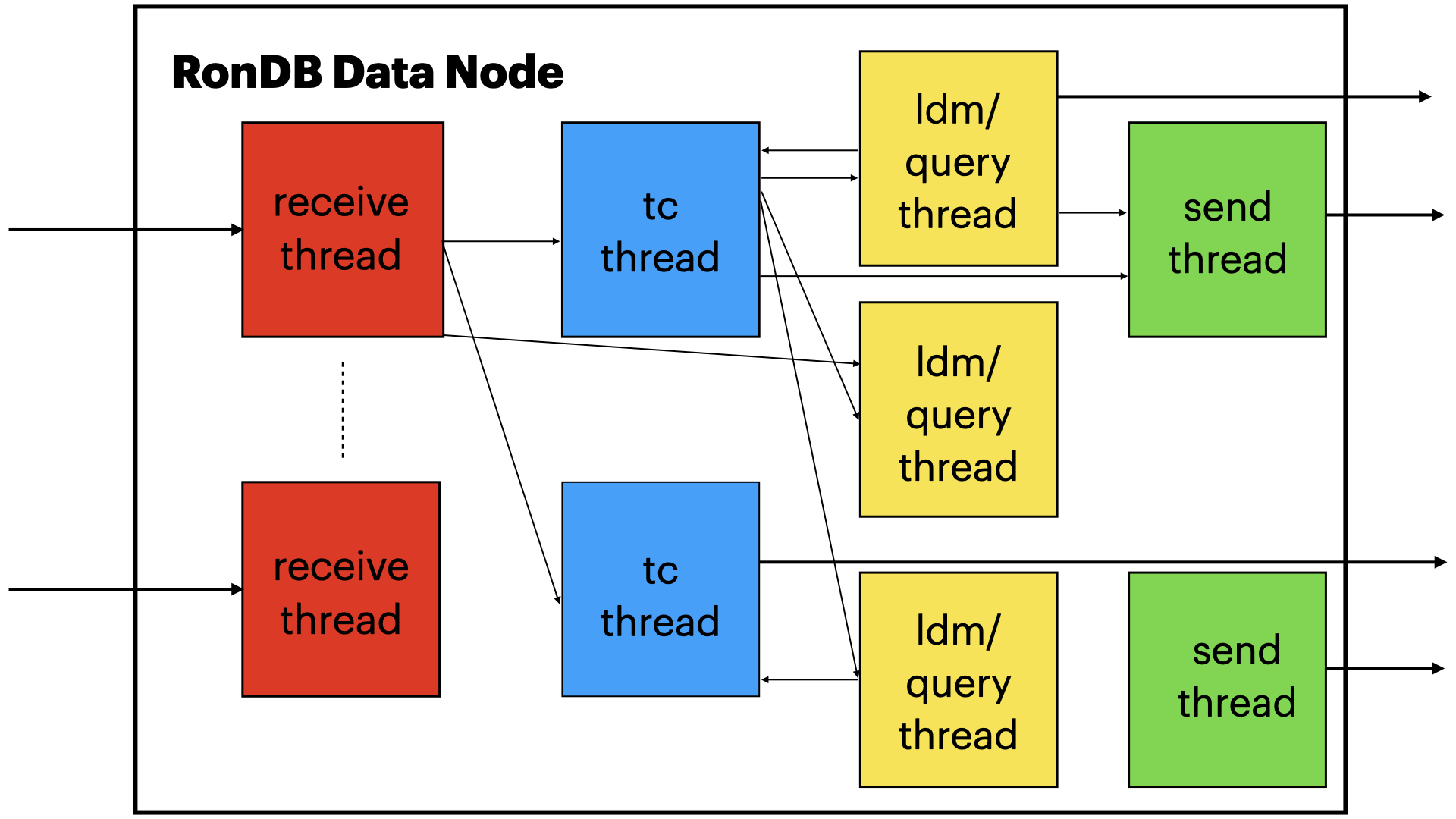 ldm thread is a key thread type. The ldm thread is responsible to read and write data. It manages the hash indexes, the ordered indexes, the actual data and a set of triggers performing actions for indexes, foreign keys, full replication, asynchronous replication. This thread type is where most of the CPU processing is done. RonDB has an extremely high number of instructions per cycle compared to any other DBMS engine. The ldm thread often executes 1.25 instructions per cycle where many other DBMS engines have reported numbers around 0.25 instructions per cycle. This is a key reason why RonDB has such a great performance both in terms of throughput and latency. This is the result of a design of data structures in RonDB that is CPU cache aware and the functional separation of thread types.

query thread is a new addition that was introduced in NDB Cluster 8.0.23. In NDB this is not used by default, RonDB enables the use of query threads by default in the automatic thread configuration. The query threads run the same code as the LDM threads and handles a subset of the operations that the ldm thread can handle. A normal SELECT query will use read committed queries that can be executed by the query threads.

A table partition (sometimes referred to as a table fragment or shard) belongs to a certain ldm thread, thus only this ldm thread can be used for writes and locked reads on rows in this table partition. However for read committed queries, the query threads can also be used.

In RonDB 21.10 the query threads can also be used for some of the other read queries, in particular locked reads.

To achieve the best performance RonDB uses CPU locking. In Linux, it is quite common that a thread migrates from one CPU to another CPU. If the thread migrates to a CPU belonging to a different CPU core, the thread will suffer a lot from CPU cache misses immediately after being migrated. To avoid this RonDB lock threads to a certain CPU core. Thus it is possible to migrate the thread, but only to the other CPU in the CPU core that share the same CPU caches. 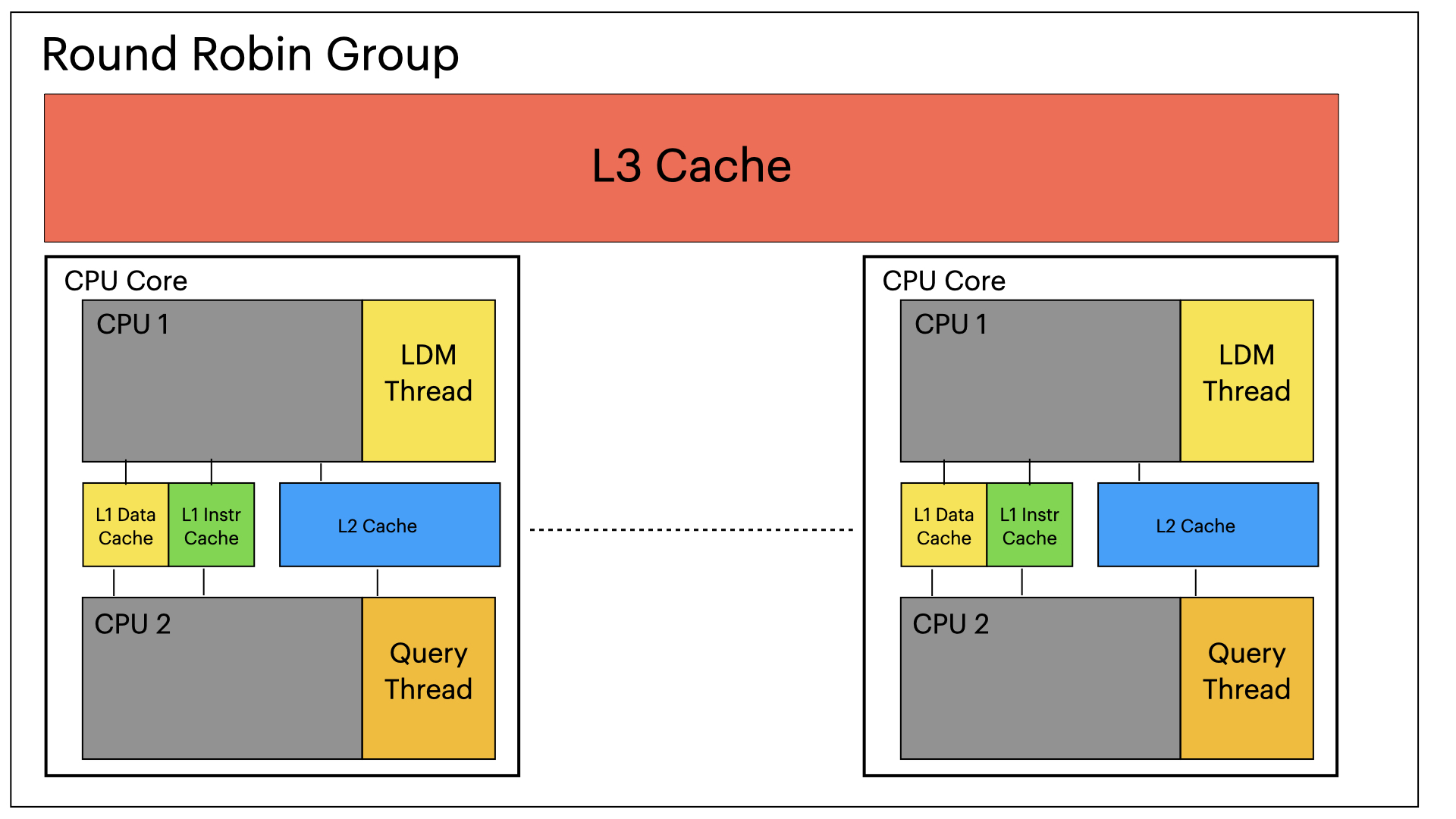 query thread makes it possible to decrease the amount of partitions in a table. As an example we are able to process more than 3 times as many transactions per second using a single partition in Sysbench OLTP RW compared to when we only use ldm threads.

In addition query threads ensure that hotspots in the tables can be handled by many threads, thus avoiding the need to partition even more to handle hotspots.

At the same time a modest amount of table partitions increases the amount of writes that we can perform on a table and it makes it possible to parallelise range scans which will speed up complex query execution significantly. Thus in RonDB we have attempted to find a balance between overhead and improved parallelism and improved write scalability.

Costs of key lookups are not greatly affected by the number of partitions since those use a hash lookup and thus always go directly to the thread that can execute the key lookup.

RonDB locks ldm threads and query threads in pairs. There is one ldm thread and one query thread in each such LDM group, we attempt to lock this LDM Group to one CPU core. LDM Groups are organised into Round Robin Groups.

A common choice for a scheduling algorithm in an architecture like this would be to use a simple round robin scheduler. However such an algorithm is too simple for this model. We have two problems to overcome. The first is that the load on ldm threads is not balanced since we have decreased the number of table partitions in a table. Second writes and locked reads can only be scheduled in an ldm thread. Thus it is important to use the Read Committed queries to achieve a balanced load.

Given that we use less table partitions in RonDB compared to other solutions, there is a risk of imbalanced load on the CPUs. This problem is solved by two things. First we use a two-level load balancer on ldm and query threads. This ensures that we will move away work from overloaded ldm threads towards unused query threads.

ldm and query threads use around 50-60% of the available CPU resources in a data node.

The tc threads receive all database operations sent from the NDB API. It takes care of coordinating transactions and decides which node should take care of the queries. It uses around 20-25% of the CPU resources. The NDB API selects tc threads in a node using a simple round robin scheme.

The total cost of sending can be quite substantial in a distributed database engine, thus the adaptive algorithm is import to balance out this load on the various threads in the data node.

The main threads can be 0, 1 or 2. These threads handle a lot of the interactions around creating tables, indexes and any other metadata operation. They also handle a lot of the code around recovery and heartbeats. They are handling any subscriptions to asynchronous replication events used by replication channels to other RonDB clusters.

RonDB is based on NDB Cluster. NDB was focused on being a high-availability key-value store from its origin in database research in the 1990s. The thread model in NDB is inherited from a telecom system developed in Ericsson called AXE. Interestingly in one of my first jobs at Philips I worked on a banking system developed in the 1970s, this system had a very similar model compared to the original thread model in NDB and in AXE. In the operating system development time-sharing has been the dominant model since a long time back. However the model used in NDB where the execution thread is programmed as an asynchronous engine where the application handles a state machine has a huge performance advantage when handling many very small tasks. A normal task in RonDB is a key lookup, or a small range scan. Each of those small tasks is actually divided even further when performing updates and parallel range scans.

This means that the length of a task in RonDB is on the order of 500 ns up to around 10 microseconds. A normal time-sharing operating system would perform terribly in such an environment, both with regard to latency as well as in throughput. In the early days the competitors still used time-sharing OSs as their base and NDB would often outperform its competitors by a magnitude. RonDB still outperforms its competitors, but now the thread model is only one of the reasons for the outstanding throughput and latency.

Time-sharing operating systems are not designed to handle context switches of this magnitude. NDB was designed with this understanding from the very beginning. Early competitors of NDB used normal operating system threads for each transaction and even in a real-time operating system this had no chance to compete with the effectiveness of NDB. None of these competitors are still around competing in the key-value store market.

The first thread model in NDB used a single thread to handle everything, send, receive, database handling and transaction handling. This is version 1 of the thread architecture, this is implemented also in the open source version of Redis. With the development of multi-core CPUs it became obvious that more threads were needed. What NDB did here was introduce both a functional separation of threads and partitioning the data to achieve a more multi-threaded execution environment. This is version 2 of the thread architecture.

Modern competitors of RonDB have now understood the need to use asynchronous programming to achieve the required performance in a key-value store. We see this in AeroSpike, Redis, ScyllaDB and many other key-value stores. Thus the industry has followed the RonDB road to achieving an efficient key-value store implementation.

Most competitors have opted for only partitioning the data and thus each thread still has to execute all the code for meta data handling, replication handling, send, receive and database operations. Thus RonDB has actually advanced version 2 of the thread architecture further than its competitors.

All modern CPUs use both a data cache and an instruction cache. By combining all functions inside one thread, the instruction cache will have to execute more code. In RonDB the ldm thread only executes the operation to change the data structures, the tc thread only executes code to handle transactions and the recv thread can focus on the code to execute network receive operations. This makes each thread more efficient. The same is true for the CPU data cache. The ldm thread need not bother with the data structures used for transaction handling and network receive. It can focus the CPU caches on the requirements for database operations which is challenging enough in a database engine.

This focus has enabled us to achieve an IPC of beyond 1.25 for the ldm threads which executes most of the instructions in RonDB.

A simple splitting of data into different table partitions makes sense if all operations towards the key-value store are primary key lookups or unique key lookups. However most key-value stores also require performing general search operations as part of the application. These search operations are implemented as range scans with search conditions, these scale not so well with a simple splitting of data.

To handle this RonDB introduces version 3 of the thread architecture that uses a compromise where we still split the data, but we introduce query threads to assist the ldm threads in reading the data. Thus RonDB can handle hotspots of data and require fewer number of table partitions to achieve the required scalability of the key-value store.

Thoughts on a v4 of the thread architecture has already emerged, so expect this development to continue for a while more. This includes even better handling of the higher latency to persistent memory data structures.

Finally, even if a competitor managed to replicate all of those features of RonDB, RonDB has another ace in the 3-level distributed hashing algorithm that makes use of a CPU cache aware data structure.

All of those things combined makes us comfortable that RonDB will continue to lead the key-value store market in terms of lowest Latency, highest Availability, the highest Throughput and the most Scalable data storage. Thus, being the best LATS database in the industry.