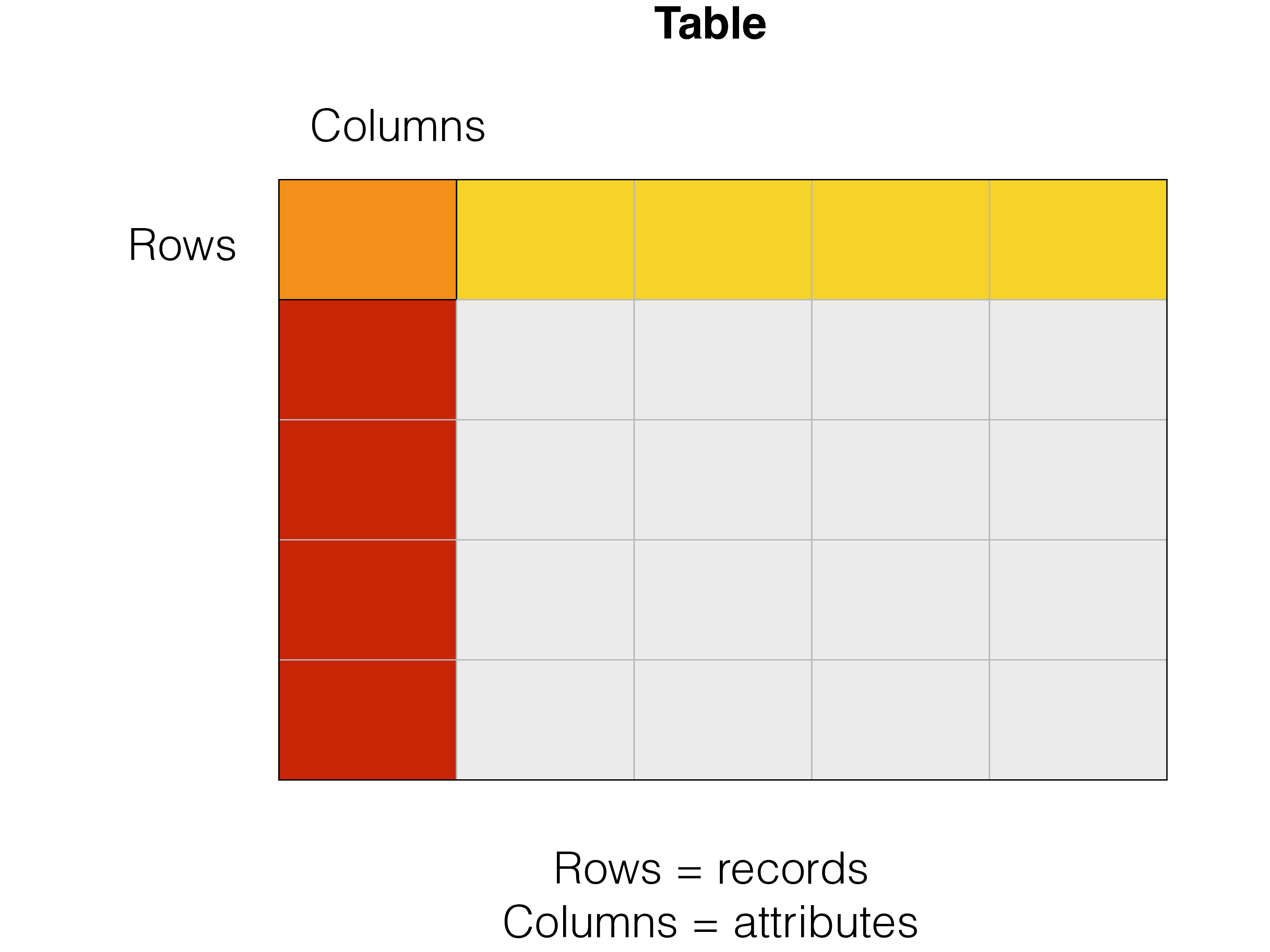 A database is used to store information, this information is represented as values that can be of many different data types. More or less every conceivable database solution organises its data into records. A record can consist of one or more attributes. Synonyms for attributes are columns and fields. A synonym for record is row.

A column can only contain a single value according to the relational model. Most relational DBMSs does however allow for various complex objects stored in Binary Large OBjects (BLOBs).

In order to organise data it is common to employ some sort of schema to describe the data. It is possible to avoid the schema, in this case each row will have to contain the schema describing the row. 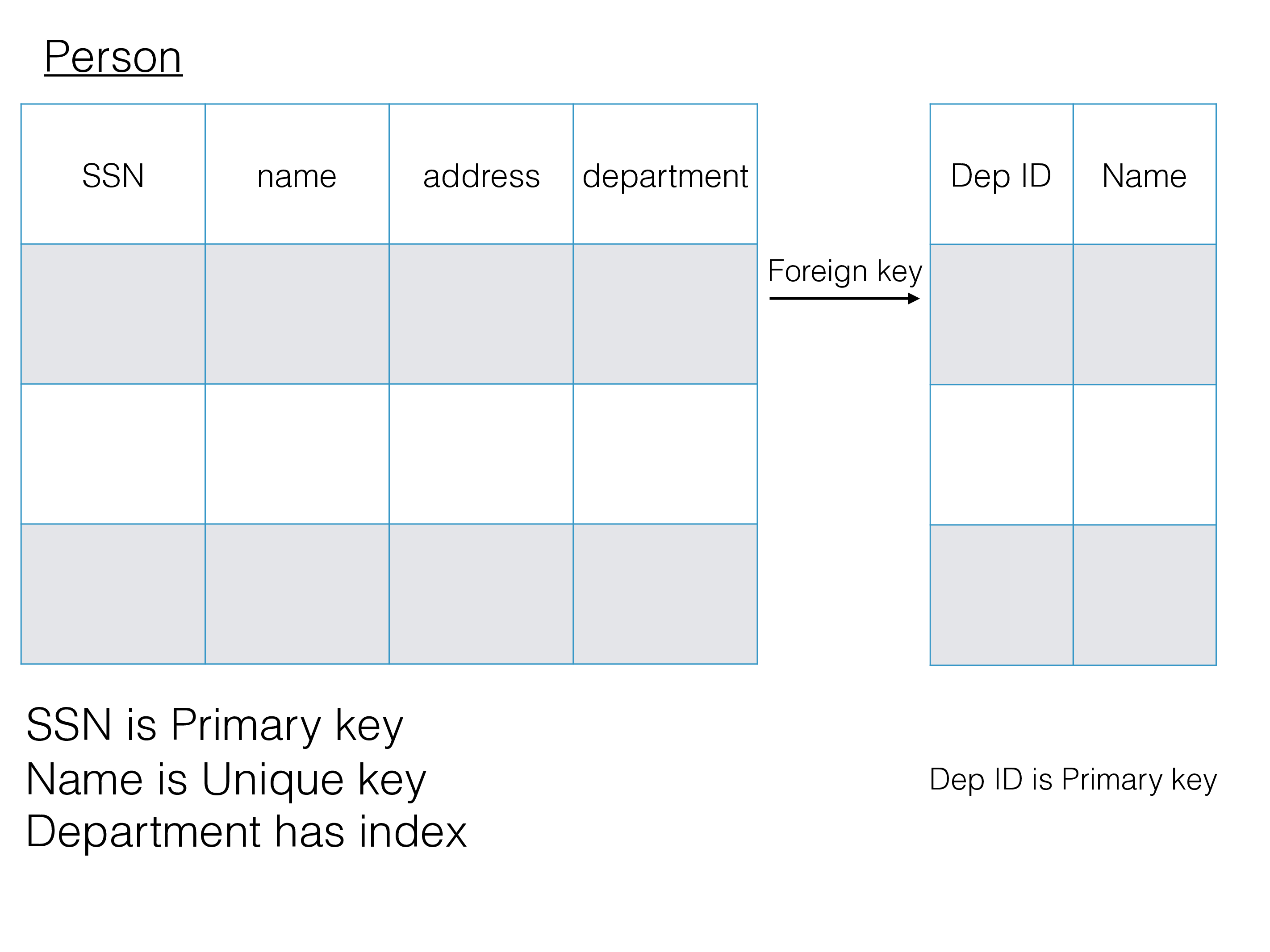 Another key concept in the relational model is primary key, this is a unique reference to a row in the table. If several unique identifiers exist in a table these are unique keys, only one primary key can exist in a table. Both primary key and unique keys are implemented using indexes that ensure uniqueness. In addition many non-unique indexes can be defined on a table.

Foreign keys defines relational constraints between tables in the schema. A foreign key above in the table person (child table) refers to a row in the department table (the parent table). The child table has a unique reference to the row in the parent table. Normally the columns defining the foreign key relation has an index defined on them (it is a requirement in RonDB). The above figure shows an example of this.

There are other models where one describes the schema in each row. The popular format JSON follows this model.

One benefit of the relational model is that it is easy to reason about queries in this model. For example a select of a subset of the rows in a table and a projection only reading a number of columns delivers a query result which in itself is a table. A table can be joined with another table (or joined with a select-project of another table). The result of a join is again something that is a table. The result of a join can be joined with yet another table. In this manner a query can be arbitrarily complex. Sometimes this is called select-project-join. We have pushed some of this functionality down into the data server part and call the module that handles this DBSPJ where SPJ comes from Select-Project-Join. There are many types of joins, equality joins, semi-joins, cross product and so forth.

During the early phases of developing an application it is not crystal clear how the data model will look like. Thus the model constantly changes. As development progresses the model tends to be more and more fixed and changes are often expensive. This is true independent of how schemas are stored. This is just how development for any application happens.

If all records have their own schema we can end up with quite a messy data model at the end. In coding one talks about spaghetti code and similar here it is easy to end up with a spaghetti data model if there is no control of the development of the schema.

With RonDB we want to make it easy to change the schema dynamically in the early phases of development and in later phases of the development. At the same time we want to get the benefits of the relational model and its strength in handling complex queries.

Thus in RonDB (as in MySQL) you define a table to consist of a set of attributes with a table name.

As most modern implementations of relational DBMSs RonDB have added support for BLOBs (Binary Large OBjects) of various sizes and types such as GIS types and JSON objects (these are BLOBs that contain a self-described document, containing its own schema per document).

RonDB is a distributed database as well. Thus the table has to be partitioned and replicated in some fashion as well. We selected horisontal partitioning in RonDB. Thus each row is mapped to one partition of the table. Each partition contains a subset of the rows, but it contains all attributes of the table for the rows it stores.

RonDB employs replication to ensure that data remains available in the presence of failures. We need a model to map the replicas to nodes. In RonDB we have selected a mapping model that maximises the amount of node crashes we can survive. One could have employed a model where we spread the replicas in such a way that we optimise for fastest possible restart times. But the fastest restart time model can only handle one node crash which isn't good enough for high availability in a large cluster.

Node groups divides data in the same manner as done for sharding. Therefore one of the features of RonDB is that it handles auto-sharding. 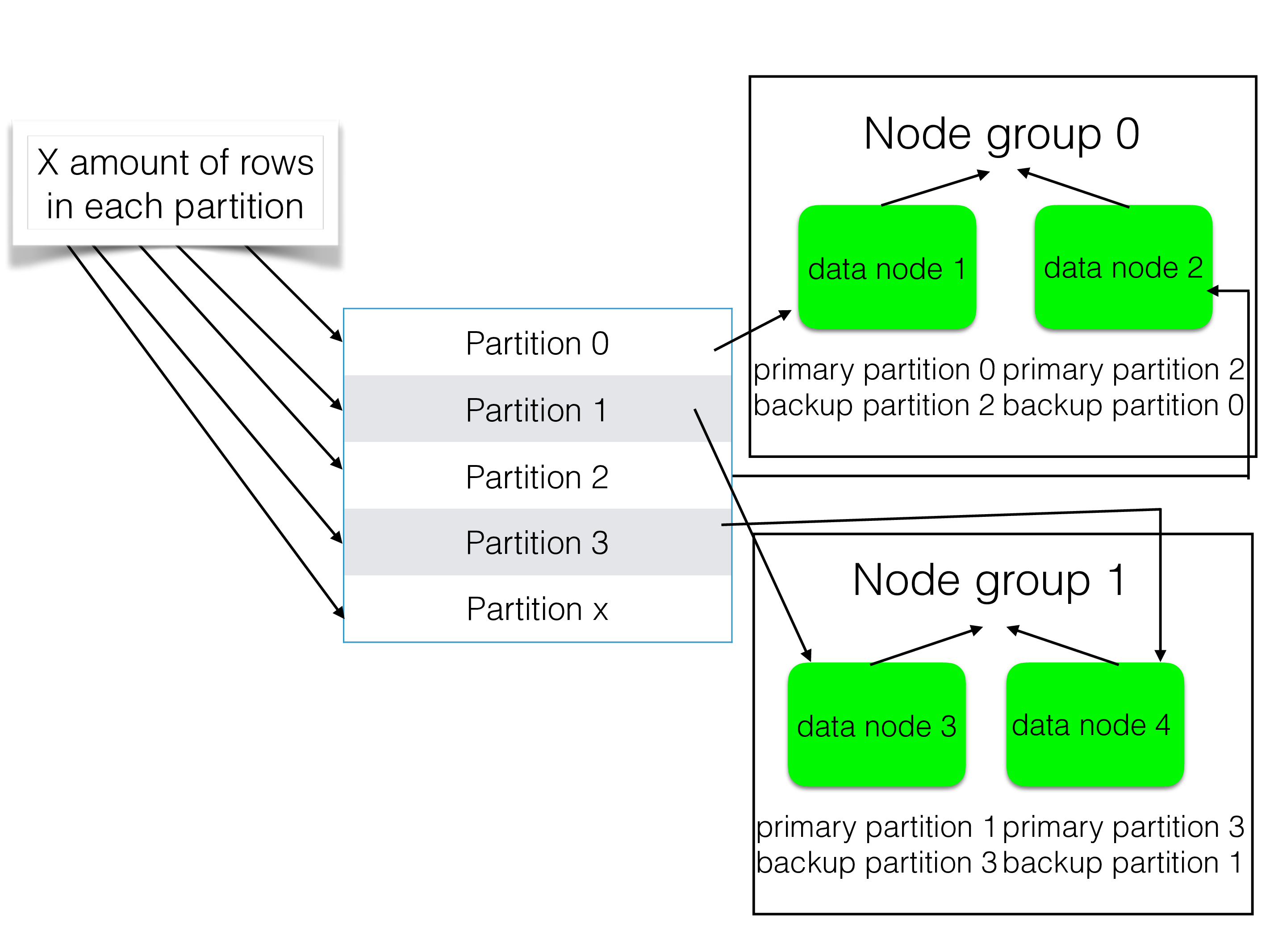 RonDB have its own heartbeat handling, when a node dies it will stop sending heartbeats, the neighbour nodes will discover the node failure and at failure the surviving nodes that can communicate with each other will work together in definining a new cluster setup with the remaining nodes.

We have to handle the case where network partitioning can occur. The simplest case is two data nodes and the network between those nodes is broken. In this case both nodes will attempt to form a new cluster setup. If both nodes are allowed to survive we will have two databases which is something we want to avoid.

To handle this situation we use another node in the cluster that doesn't own any data as arbitrator. This node will decide which set of nodes that should survive. The arbitrator is only contacted if a network partitioning is possible, the first one to contact it will win.

Tables in RonDB use a concept called hashmaps. Hashmaps were introduced to make it easy to reorganize tables when new node groups are created. The algorithm we use to find the record based on a key is called distributed linear hashing and was named LH^3 in my Ph.D thesis. The linear hashing algorithm makes it possible to dynamically grow and shrink the hash table. There is one drawback for table reorganisation, the drawback is that when we have e.g. 6 partitions the first 4 partitions will contain 75% of the data (thus 18.75% per partition) and the last 2 partitions will contain 25% of the data and thus 12.5% per partition. Thus we won't have a balanced data fragmentation as is desirable.

The solution is hashmaps. We will hash into one of the 3840 buckets in the hashmap. Next we will map the bucket in the hashmap into the partition it should be stored in. When reorganising a table we simply change the mapping from hashmap bucket to partition. The fragmentation will thus be a lot more balanced than the traditional linear hash algorithm.

With RonDB we support online add of columns, online add/drop of tables, online reorganization of tables to handle new nodegroups introduced or to handle change of table distribution.

This means that we won't necessarily have balance on the use the data owning threads (ldm threads). We have solved this by introducing query threads that can assist a set of ldm threads with reads. Combining this with some advanced scheduling of local queries inside a data node ensures that the CPUs in the data nodes gets a balanced load.

In earlier versions of RonDB the focus was to provide a write scalable architecture. We have added an option that makes it possible to have tables scale better for reading. This is now the default behaviour. This is an option when creating the table (or one can set the option in the MySQL Server if all tables should use this option). With this option READ_BACKUP=1 the reads can go to any fragment replica where the row is stored. There is a tradeoff with this in that write transactions will be slightly delayed to ensure that the reads can see the result of their own changes in previous transactions. We will explain more about the need for this special type of flags when we introduce the distributed transaction protocol that RonDB uses.

Fully replicated tables makes it possible to build simple read scalability into your applications. A natural architecture is to have one MySQL Server and one RonDB data node per machine that can communicate without using networking equipment. In this manner we can have up to 144 machines with the same data delivering many millions of SQL queries against the same data. Any changes are done to all replicas synchronously, no need to worry about replication lags and things like that.