To read, write and manage data and metadata inside RonDB one has to go through an API. Even when using SQL the query will have to be passed through an API before it reaches the NDB data nodes.

The most well known interfaces are all the interfaces that one can use to access any MySQL Server. All this interfaces works with MySQL Cluster by using tables that use NDB Cluster as the storage engine. 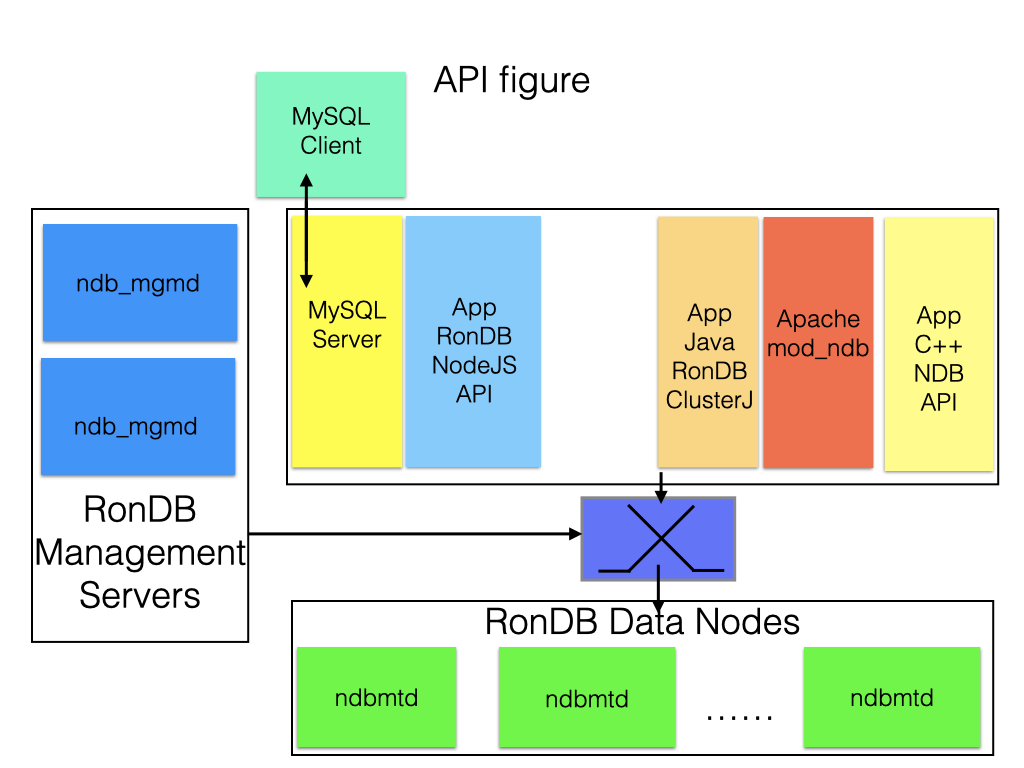 There are a number of direct interfaces that we maintain, these interfaces will go directly from the application to the data nodes. This means that we cut away the Query Server functionality and only use the Data Server capabilities. This is especially interesting when building a data service on top of MySQL Cluster. In this case it is probably more appropriate to say that one uses NDB Cluster. Examples we've seen when this is appropriate is in building an LDAP server, a file server for Hadoop File Service, a DNS server, a DHCP server and a lot of other functionalities. In this case we're building a service which is similar to the services a Query Server that can handle SQL does, but it is usually a bit more specialised in its use case. In the figure below we show a few examples of direct applications. 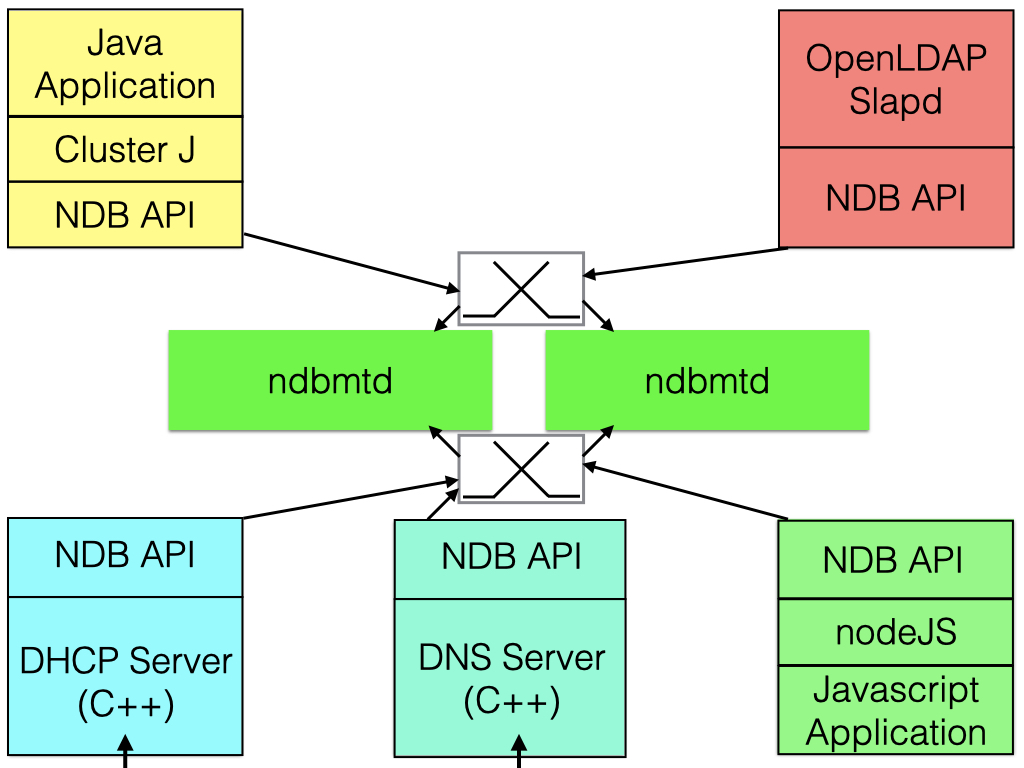 In this case one can use the C++ NDB API, this is the API that all other APIs are eventually going to use. This represents the shortest path to the data in NDB Cluster. The C++ NDB API is fairly complex to use directly, another interface which is quite direct but a lot simpler to program against is ClusterJ. ClusterJ is a Java API, it provides a simple object to relational mapping that makes it easy to work with NDB. There is also a direct mapping of the C++ NDB API available in Java.

Another interface that can be useful to develop high-performance web services is NodeJS. This interface makes it possible to contact the NDB data nodes from a JavaScript application.

In addition we have a memcached service built on top of MySQL Cluster which makes it possible to use NDB as a memcache server.

Programming against a direct NDB API can thus only be done in C++, Java and JavaScript. Most other languages have translation layers that would be possible to map the C++ NDB API to the respective languages. But programming in other languages than these currently requires going through the MySQL APIs.

MySQL Cluster is MySQL with NDB as a storage engine plus a lot more. Thus you can access NDB from any MySQL Server that is part of the cluster you are connecting to.

Connector/J is a very well written Java API towards MySQL. It implements the JDBC interface. Programming in Java means that it is easy to mix using Connector/J for more complex queries and using ClusterJ for simple and more direct queries.

Connector/Net provides an API towards the .Net environment. This environment provides access to the CLR (Common Language Runtime) from Microsoft and thus makes it possible to use many different languages available in Windows environments such as C#.

The MySQL C API is the API you will use when using the MySQL client and it can be used directly from C and C++. There is also a MySQL C++ API. The C interface to MySQL is used to implement many of the APIs used from other languages.

There is a MySQL API in PHP which is probably still the most popular API used for MySQL applications. There are APIs available for C++, Python, Go, Java, JavaScript and a few more.

Direct APIs will go directly to the NDB data nodes without passing the MySQL Server. Thus those interfaces are able to perform better. At the same time it means that one has to program against a lower-level interface. Direct APIs don't exist for all languages, the main direct API is the C++ NDB API which is the base that everyone uses to access the NDB data nodes. Most languages have escape routes such that one can call a function in C. Through these interfaces one can always access the C++ NDB API from all those languages.

As examples in Ruby it is possible to inline C and C++ code and to use something called Rice to access objects written in C++. Scala can access C and C++ code through JNI (Java Native Interface). Go also have a C interface.

ClusterJ is a bit more than just a wrapper for the C++ NDB API. It does still go through the C++ NDB API on its way toward the NDB data nodes. But it provides an easy object-relational mapping interface to make it easy to work with.

Here one defines objects that are simply tables in NDB. These objects can be read from NDB and written down to NDB after setting the variables in the object.

A good example of an open-source product using ClusterJ is the HopsFS that implements the metadata server in the Hadoop filesystem (HDFS).

NodeJS makes it possible to quickly get up and running with MySQL Cluster to develop web applications using JavaScript programs.

The OpenLDAP have a backend that provides access to NDB. A number of users have started from this backend and developed LDAP servers based on this.